Seeing as I had to come up to Westcombe Park to see Gary and sort out some song/CD stuff, I thought I’d (again) do a spot of playing further up the river. In particular, somewhere on the river walk between London Bridge and Waterloo, where I walked with Gary and Daniella a few weeks ago. I remember there were loads of people playing then – solo, and groups. So, having finished my business, I got to London Bridge just before 5 o’clock and started the walk, which entails going through several tunnels – favoured by saxophonists it seems. I remember there was a guy in one before. In the same one today, there’s a girl on a bassoon, with a load of coinage in the case. I almost asked her how long she’d been there, thinking I might try it, but then decided I didn’t want to be stuck in a tunnel, even a short one like that. It was bringing back memories of the underground – something I want to avoid.
Carrying on out the other side, there’s a combo (how I love old-fashioned terms like that) – mainly drum stuff, and another group on a grass verge nearby, waiting to set up. Or maybe they’re just ‘hangin’ out, man’, using the old parlance. I love some of those old parlances.

I finally find a place in the shade, on a stretch called The Queen’s Walk, with St. Pauls on the other side about a mile to my right, and just across the river and a bit to the right, the HMS President – a leisure boat.
To the show: I start with the traditional opener for foreign lands – The Third Man, then the 2nd one for foreign lands – La Vie En Rose, during which I get a donation, then Here Comes The Sun, Albatross, Music To Watch Girls By, Can’t Help Falling In Love, When I’m Sixty-Four, after which I have a chat with a man about my guitar and amp set-up (he likes my ‘clean, mellow sound’), during which I whole-heartedly recommend my Micro Cube, then Wouldn’t It Be Nice, Borsalino…then the inevitable occurs. A man appears in front of me. He’s wearing an orange HVJ, or HVV – as he’s got a vest, not a jacket, with CIS SEC on it – SEC must be SECURITY, but I don’t know what the CIS means – and he’s carrying a walkie-talkie – another word gathering cobwebs in recent times. He’s ‘sorry, but this is private property and you’ll have to leave’. Showcasing my incredible sense of prescience, I say ‘I thought you’d be here sometime soon’. Then, deciding I’m not going down alone, I mention all the other musicians playing down the road. He doesn’t know about them and he doesn’t care because they’re not on his bit. All he knows is this bit ‘from here down to ITV’ – he points towards Waterloo Bridge. Exactly Where ITV is, I can never work out and I don’t think HE knows, either.

Every 30 seconds he speaks into his walkie-talkie and says variations of ‘Yes, I’m dealing with him now’. But apart from me feeling a bit annoyed at being ‘dealt with’ like some vagrant, he’s fairly polite. At one point he says something about maybe he could write a song with me. So he fancies being in ‘showbiz’! Stick to the day job, pal: master of all this little stretch, from ‘here to ITV’. Yes, he’s polite enough but he won’t let me take a photo of him. Not even with St. Pauls in the background. I ask if he knows where I can play – legally, and again he says all he knows is ‘not from here down to ITV’. I notice he’s loath to leave me. He stays the whole time I’m packing up, and while I take a photo of my view, with St. Pauls in the background, of course. When I pick up the guitar, about to head off, he says ‘Sorry about that, have a nice evening, sir’. I say ‘Well, it was alright ’til you came along’, which makes him chuckle, the poor bugger.

As we’re both walking off, he takes another walkie-talkie call – ‘Yes, he’s been dealt with’, he says (the bastard) which really makes me feel like some vagrant. Fancy saying that within earshot of me. ‘He’s been dealt with’ – you sonofabitch. In need of some revenge, I start to lag behind him, and when I’m far enough, I get a photo. Unfortunately, because I take it while I’m walking, it’s a bit blurry. Still, I suppose it afforded me some small degree of the required revenge. A couple of minutes further on, I’m still stalking him and he’s come upon his next job: two blokes sitting down, one has a guitar. I can tell he’s going through the same routine. Hell, if it wasn’t for illegally parked buskers, this guy would be out of a job!

For the rest of the walk – before and after the Festival Hall, I don’t pass anyone else playing. I feel like going home but don’t want to be squashed in a rush hour train. Then a terrible thought occurs. Dare I risk it? Should I try my luck on the dreaded Hungerford Foot Bridge? The very same that holds such awful memories? – of freezing cold temperature and shunning pedestrians? Yes, I DO dare it, because I’m an idiot.

I pass one ‘down and out’ (he looks down and out, anyway) with an acoustic 12-string guitar, a little way from the steps, and then some girls handing out leaflets, and then nothing – there’s no one set up, so I go to where I was in October (idiot) and set up…and it’s the usual annoyances, mainly the trains coming into and out of Charing Cross Station every 2 minutes but at least the weather’s fine.

But this is the day it happens – the day I knew would happen, sooner or later. I get no money. Not a penny. Not even a foreign one. And the amount of people walking by is enormous – hundreds and hundreds, and not one person stops, apart from 2 Japanese blokes – to take a picture of me. Yes, the landmark day finally materialised. In fact, it’s weird. I have a perverse, nay, even sadistic hope, near the end, that no one WILL donate, just so I can write it down! – that this was the day it finally happened. At least I didn’t get thrown off, literally and metaphorically, which is something, I suppose.
But it’s depressing – I can hardly hold my head up, and I vow NEVER, under any circumstances, ever to return to this accursed spot. But there it is: millions of people (‘swarming like flies, etc…’), too busy trying to get somewhere, to take notice. Oh! it did get me down, though. So much so, I thought ‘I don’t want to write this down tomorrow’, so I did it on the train home, as I had this notebook with me, anticipating such an occurrance. 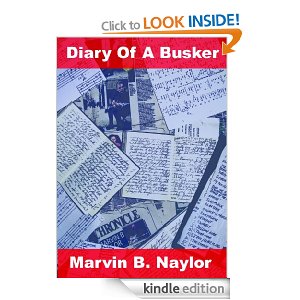